Back to News ListPreviousNext
View Page Gallery
Posted on: 09/01/2020

Year 8 pupils in Ms Fletcher’s English class have been praised for the high quality of work they produced as part of their protest poetry project.

For over a month pupils researched, read and analysed poems written by the likes of Maya Angelou and Abel Meeropol, who wrote protest poems about issues such as sexism and racism.

To round off their projects, pupils were asked to carry out a creative task responding to what they had learnt about the poets and their work.

English teacher Ms Fletcher said: “I’m extremely impressed by the way pupils engaged with the topic and how they responded to the task.

"Some of the work produced is truly wonderful including a clay model of a fist by Caleb, a protest poem written by Aris and a mini display of protest placards by Abid. Well done to everyone who took part.”

Pupils in Year 8 carry out this protest poetry research project alongside their study of John Steinbeck's 'Of Mice and Men', enabling them to engage with the novella's context.

The project also opens up discussion about some of the injustices that continued well after its publication and how writers and activists responded during the civil rights movement. 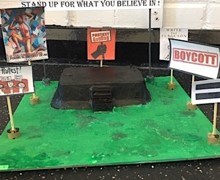