Morpeth School began life in 1910 when the LCC (London County Council) committed to the construction of new ‘central schools’ across the capital.

The aim of these schools was to provide a ‘rigorous and academically focused’ curriculum that would serve the most able pupils living in some of London’s poorest areas.

As such, an entrance exam was set up and the first intake of Morpeth pupils in 1911 (from across a range of age groups) made up the ‘top 5%’ of the ‘high ability band’ in the old Metropolitan Borough of Bethnal Green. Thus, Morpeth Street Central School began life in what is now our East Wing (or Maths Block). 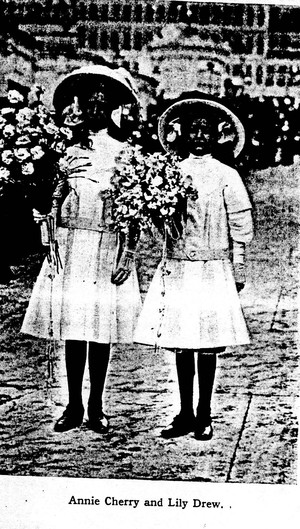 In recognition of the LCC’s achievement in getting these new central schools up and running so quickly, Morpeth Street was asked to send two pupils to the coronation of King George V. A wonderful photo exits of Lily Drew and Annie Cherry presenting the new King with bouquets of flowers. 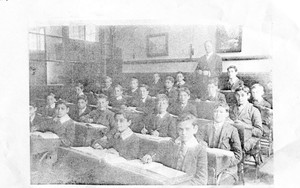 However, as is perhaps characteristic of a busy London borough, it soon became clear that more school places were needed for older pupils. Just opposite Morpeth Street School sat Portman Place Primary School (now known as our ‘West Wing’ or English block); the latter school was closed, and the two buildings merged to form an enlarged Morpeth Street School in 1927.

The destruction of the imposing wall that once separated the two buildings brought with it the uprooting of two old mulberry trees on the site. Pupils and staff were very upset, shaken perhaps by the significantly reduced emphasis on planning and preservation that we expect today.

A competition was launched in school to design a badge and tie that would immortalise the two mulberry trees; the winner’s work survives to this day and we retain the same crest and tie design.

Our story – one that is overwhelmingly dominated by a passionate commitment to the inclusive education of local children – begins here.

Given Morpeth’s location in the East End of London, the two great conflicts of the twentieth century were never far away. The First World War brought tragedy to the school gates; many older pupils who had joined in 1911 were killed in the final offensives of 1917-1918.

In 2014, the centenary of the outbreak of hostilities, we carried out extensive research 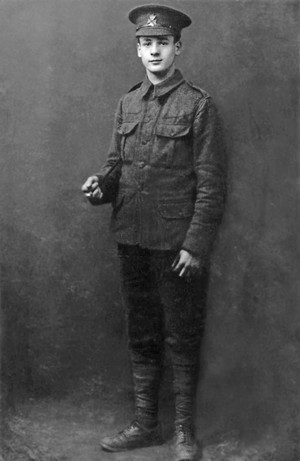 on a former pupil. Walter Alfred Gillings was killed in Belgium in June 1917 on the  first day of the Battle of Messines. His body was never found; before 2014, the only reference to him was on the Menin Gate Memorial to the Missing in Ypres.Of course, the Second World War broke out just 21 years later and Morpeth found itself on the front line after the start of the Blitz in September 1940. The Headmaster was initially reluctant to evacuate; the mass evacuation of children from the area which had started in September 1939 was already a relative failure by 1940 and the LCC was obliged to continue the education of the many thousands of children who returned.

However, as bombing intensified throughout the autumn of 1940, the railway line bordering the school and houses on Morpeth Street were badly damaged. The roof of the West Wing was destroyed by incendiaries and it became impossible to operate the site as a school. So, with some reluctance, Morpeth relocated to Bury St. Edmunds in Hertfordshire and made an attempt to continue the education of local children. 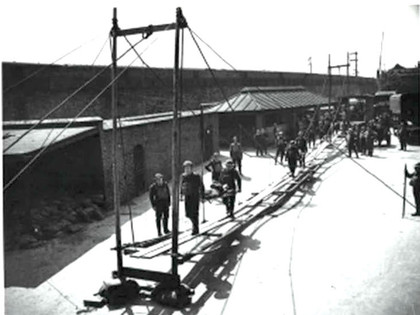 crews who operated in Victoria Park . However, many children still chose to stay, as London entered the full throes of war, with many children’s education prematurely stopped to assist with running homes in wartime. Indeed, some pupils who stayed behind were victims of the Bethnal Green Tube disaster in March 1943 which claimed the lives of 178 local people.The end of the war opened a new chapter for Morpeth. The 1944 Butler Act significantly extended educational requirements for children, and we rose to the challenge. With initially very little funding, the buildings were repaired and the school was back in business. The post-war years brought huge sporting success, a dramatic rise in the popularity of the Arts as well as unique contacts with local employers who provided thousands of 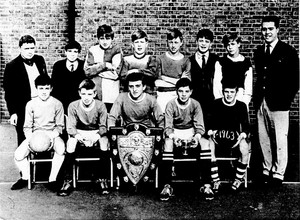 opportunities for Morpeth pupils over the years. Further expansion came during the late 1960’s with the construction of a new ‘North Wing’, as Morpeth became a flagship for the Wilson government’s new comprehensive school model. In the modern educational era, Morpeth continues to expand and innovate; the 1960’s North Wing has been replaced by a completely new building. New sports and music facilities, along with superb classrooms and landscaping, have been created as a result.

We continue to offer a huge range of GCSE and A Level courses and still provide an outstanding, and inclusive, education for children living in East London. In this respect, as we move in to our 116th year, we proudly uphold the LCC’s original vision for a ‘rigorous’ curriculum which has high expectations of the young people in our care.